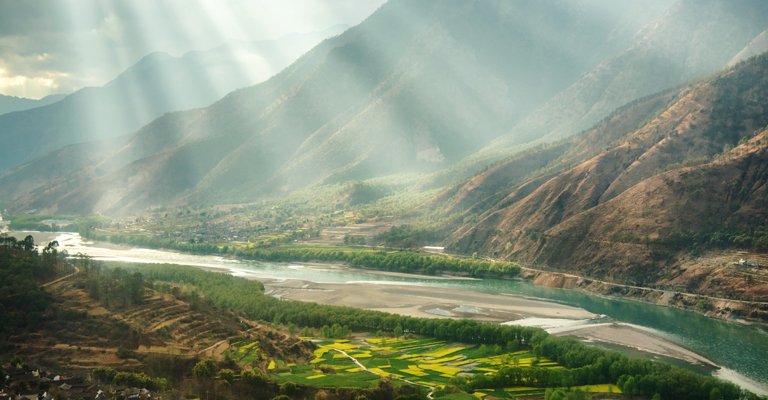 When The Psalmist says my heart is steadfast, it reminds me of the Yangtze Jiang River in China. Yangtze Jiang, the world’s third river, starts as a tiny bubbling spring way up in the frozen highlands of Tibet/Qinghai. From the moment of it’s birth, the river relentlessly and steadfastly flow Eastwards, first as a tiny gurgling brook, then as a small stream; next, when joined by other streams, it transformed itself into a sizeable river, cutting through flatlands then gorges, but steadfastly maintaining it’s set course, never changing or wavering.

Come wind, come weather, through storms and droughts, it maintains it’s Eastward course towards the sea. When it finally emptied into the sea, it has been transformed into the mighty “Chang Jiang”, the “Long River” serving for tens of thousands of years as the life-line towards the interior, serving a region accounting for a sizeable part of China’s trade. It has been so for the last thousand years and will be likely to be so for many more…

Steadfastness also reminds me of the words of George MacDonald, the Christian mystic and poet:

“Go, my beloved children, live your life.
Wounded, faint, bleeding, never yield the strife.
Stunned, fallen-awake, arise, and fight again.
Before you victory stands, with shinning train
Of hopes not credible until they are.
Beyond morass and mountain swells the star
Of perfect love-the home of longing heart and brain.”

Macdonald was steadfast, unmovable (even though he lost two children within the space of a year). He was wholeheartedly devoted to a ripe old age and was a great inspiration to CS Lewis who came after him.

Steadfastness especially speaks to me of William Borden of Yale, of the “No Reserves, No Retreat, …” fame. A steadfastness and perseverance in the face of unknowns in a far distant land, was only possible because he was sustained by “seeing Him who is invisible” (Hebrews 11:27), “looking forward to a city with foundations whose architectand builder is God” (Hebrews 11:10).

A man matching words with his deeds, because of a living vital relationship and fellowship with God. Borden set sail for China (Lanzhou) as a missionary but died on the way in Cairo in December 1912.

“No Regrets” was found scribbled in his Bible after his death. Part of his fortune that he bequeathed to CIM was used to build the “Borden Memorial Hospital” in Lanzhou. Many have been brought to the Lord through it’s ministry, both Chinese and other tribal groups. The hospital still exists (no. 2 hospital) as a testament to a man who had the vision and the steadfastness to accomplish great things for God.

Alas, some of us are weary and heavy laden. Isaiah 40:31 comes to me afresh: “those that wait upon the Lord will renew their strength. They will soar on wings like eagles..” Then, only then have we the  power to avoid being described:  “ .. as undependable as intermittent streams, as the streams that overflow when darkened by thawing ice and swollen with melting snow, but that cease to flow in the dry season, and in the heat vanish from their channels” (Job 6:15-17)

“Therefore, my dear brother, stand firm (steadfast). Let nothing move you. Always give yourselves fully to the work of the Lord, because you know that your labour in the Lord is not in vain” 1 Corinthians 15:58

[Sermon] Under Grace: In Relation to Service