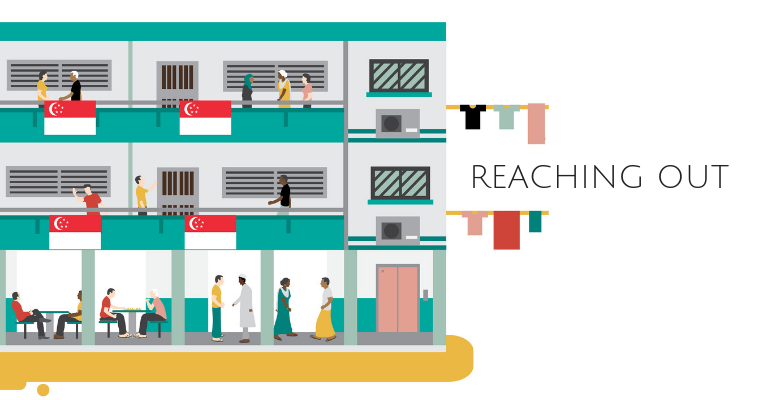 Last weekend, we went out to visit the residents around our church. This was the 3rd and final Neighbourhood Visit this year. It was very heartening to hear the various reports from the volunteers. They were sharing stories after stories of positive experiences that they had. Most reported that the residents were very friendly and received the volunteers warmly. A number were invited into the houses for a drink and a few even got the chance to pray for the residents. As I reflected on all that was shared, I realized that God was surely at work.

The pulpit series on the Luke 15 Parables (Ps Rick and Mr. Lawrence Tong) as well as the Parable of the Good Samaritan (Ps Tang Kok Fai) over the past few weeks’ have stirred our hearts to align ourselves  with God’s heart. How do I know this?  There were quite  a number of first-time participants who availed themselves after hearing the sermons. Even for those who have been regular in the NV programme, they exhibited a growing sense of excitement as we prepared to go out. They were all eager to participate in God’s heart.

It is really heartwarming to hear that when I asked people how was the visit, people are not just giving me merely a quantitative answer (i.e. We only managed to visit X households). Instead, people were sharing their experiences and about the residents they visited.

We are growing, as a church, to understand the Father’s heart for the lost, the poor and the needy. The Holy Spirit was indeed at work convicting our hearts.

As brother Guo Hua shared in the BCS Video last week, it is God who is opening all the doors. Every single door. Most of the residents were very welcoming to the volunteers. For those who were not, God used our interests, our personalities and even the free gifts to open their hearts. Here are some excerpts from volunteers.

“We knocked on a young Hindu family’s door. A man came out and was kind of hostile. But after knowing what we are doing and that we are giving them an umbrella” – Pastor Rick

“…the icy reception thawed…[we] bade him farewell but not before he offered Jean a deep-red mulberry to sample. As small as they were, mulberries broke the ice in that instance.” – Stanley & Dorcas

As I reflected on the above, I was reminded the importance and effectiveness of prayer. These were the same prayer pointers that were prayed in Small Groups and also at Prayer Core. Furthermore, the Youth ministry and even PAGE 21 conducted a prayer walk to soften the ground prior to the church heading out for NV. Truly, we praise God for answered prayers. Let us keep on praying. May we always let our light shine before others, so that they may see our good works and give glory to our Father who is in heaven. (Matthew 5:16)

[Sermon] Busyness in a Global City