Lessons from The Parable of the Good Samaritan 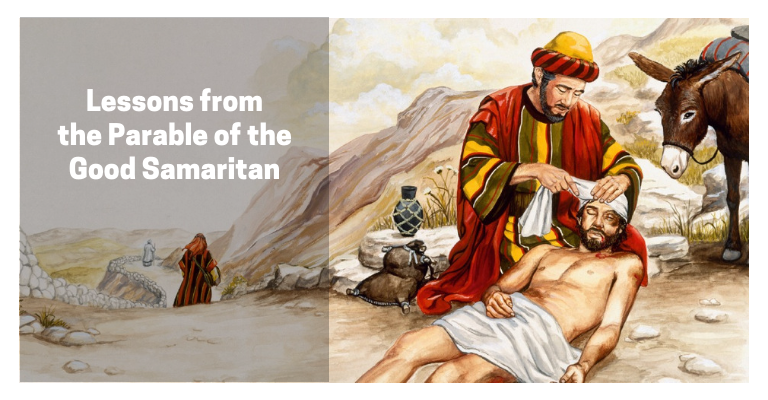 Jesus had intentionally chosen the central figure in this parable – a Samaritan – to teach the religious lawyer (in Luke 10:25-37) and us some important lessons.

To the Jews listening to Jesus at that time, they would have immediately understood. As far as the Jews were concerned, there was no such thing as a “good” Samaritan. They were hated and despised; to be avoided at all costs.

But, Jesus was purposeful in teaching what loving our neighbour means. The lessons are certainly most relevant today.

The road from Jerusalem to Jericho was treacherous, unsafe and notorious for being a bandits’ stronghold. Nobody would want to linger on or be side-tracked, but to get to their destination without delay.

The Samaritan surely did not make it to his destination in good time. His plans were totally altered the moment he saw the Jewish man, who was severely beaten, helpless, half-naked, left to die on the road side.

He felt “compassion” for him (v. 33, NLT), stopped and rendered first aid and bandaged the man’s wounds. That was not all. He put the man on his own donkey, and travelled with him, on foot, to an inn, and even took care of him! I imagined that he have taken one whole day with this man, at the expense of his own time and plans.

The Priest and the Levite must have been too “busy” with their religious duties, or perhaps they could have “urgent” matters to attend to. It was inconvenient for them to stop and help.

He used his own money to pay the inn-keeper and told him to charge the bill to his account. He would pay for whatever the cost. That’s an expense bill with no limits for whatever it takes to get the Jewish man well again.

By stopping to help, the Samaritan had risked his own safety. The thieves could be waiting to strike again and he could well be the next victim.

By bringing the beaten, near dead man to town to the inn, he risked being totally misunderstood. The Jews would easily have assumed that the Samaritan did it. He risked being judged (or misjudged) by a “lynching crowd” of Jews, seeking vengeance for the wounded fellow Jew.

Jesus made the Samaritan the hero of the story. To the shocked listeners, due to their generations of prejudices against Samaritans, nothing good could come out of a Samaritan. Certainly not these acts of kindness to a Jew.

But Jesus intentionally challenged their prejudices by this question: “Which of these three, do you think, proved to be a neighbour to the man who fell among the robbers?”

The so-called religious law expert could not even bring himself to say “Samaritan”. Instead, he said: “The one who showed him mercy.”

It would not be surprising for a Samaritan not to help a Jew. After all, Samaritans had long been despised, discriminated upon and treated with disdain by the Jews.

Instead, the Samaritan intentionally put aside all these racial and social prejudices. He recognized that the wounded man needed help regardless of his race, religion or social status.

He was inconvenienced, he risked his safety, he went the extra mile. He spent his time and money. That is a picture of loving your neighbour as yourself.

“Go and do likewise”.

[Sermon] Church for the Lost Sheep