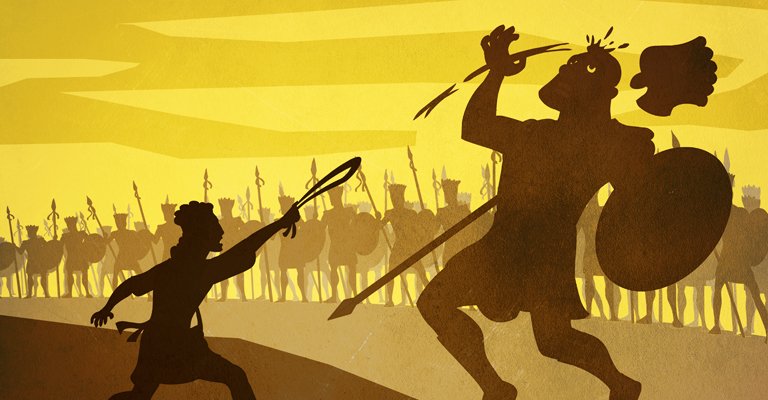 While reading God’s Word in the midst of my quiet time, I was led to read the familiar story of David and Goliath (1 Samuel 17). Through the passage, I gleaned insights of how God uses trials as opportunities for us to be ‘Davids’ in Goliath-situations.

NO ONE SEEKS OUT A CRISIS

We read that David was not looking for a fight when he set out from Jesse’s house. A concerned Jesse had sent David to seek out his three brothers at the battlefront to ascertain if they ‘were well’ (v18).

However, when David arrived at the battle lines, he stumbled into a deep crisis – the threat of a Philistine champion (v23), a terrified Israelite army, and a dismayed King Saul (v24). If that was not enough, his intentions to find out more were misjudged by his own brothers: “Why have you come down here? … I know how conceited you are and how wicked your heart is; you came down only to watch the battle.” – v28.

The truth of the matter is that none of us goes out seeking a crisis in our own lives.

However, David’s account reveals how trials have their place in our lives, and why our attitude and response matter in these difficult times.

A) Trials provide the faith-opportunity for us to demonstrate our beliefs and convictions:

Wars in biblical history were sometimes decided through ‘representative combat’ by champions of each side of the battle, as we see in this story. People believed that the outcome of the fight was determined by the warriors’ gods rather than the military might of each faction.

Against this backdrop, we are compelled to observe Saul’s beliefs in comparison to David’s convictions. Saul lost all confidence in God’s support when he saw the stature of Goliath, whose terror demoralized the Israelite army (v.11). This was despite the fact that God had empowered him to deliver Israel before (1 Samuel 11).

In contrast, David was fully confident in God: “Let no one lose heart on account of this Philistine; your servant will go and fight him.”(v.32). His decision to respond to Goliath’s challenge was birthed from a righteous anger in seeing God’s beloved people insulted (v.26b), as well as a complete trust in God’s ability to deliver him from the giant (v.37).

The bible was careful to record that David’s confidence arose from having experienced and remembered God’s hand of protection over him as a humble shepherd boy, when he fought beasts such as a bear and lion. Coming face-to-face with a giant, David saw past Goliath’s might and military experience, and trusted in God’s ability to protect him against the Philistine champion (v.45).

B)  Our response through trial can remind us and others of the need to depend on God:

As a result of his firm conviction in God, David prevailed over Goliath in a surprising twist to the story (v.50). Instead of backing away in fear, David chose to seize this faith-opportunity with courage, emerged a victor, and inspired the Israelite army to pursue the enemy (v.47). Israel was hence able to overcome their enemies eventually (v.52). David’s faith and example through this difficult time translated into a wider blessing that impacted the Israelites and God’s kingdom.

Without such reminders of our dependency on God, it would be easy for us to attribute victory or success to our effort or ability. On the contrary, journeying with God, trial after trial, steads us to rely on Him for all of our lives. In these trials, our example can inspire others, and point others to live a life of faith.

C) Trials are threads woven into the larger fabric of God’s special purpose for our lives:

Without a Goliath-problem, no one would have needed David, a ruddy shepherd boy (v.42). In fact, Saul had not even known David until this encounter (v.55-56). However, the crisis of Goliath, when met with David’s right response and victory, opened the door of opportunity for David to enter Saul’s service (1 Samuel 18:2). This eventually set the stage for David to reign as King over Israel.

With the benefit of hindsight, we now know that this event had been part of God’s larger purpose for David, even as David had already been anointed as King prior to this encounter with Goliath, or introduction to Saul (1 Samuel 16:12-13).

David’s story reveals that crises may sometimes yield a silver lining that may not have emerged in peaceful times. God can use any and every circumstance for the good of His people. Our crises, likewise, are threads woven into the larger fabric of God’s special and specific purposes for you and I – whom He dearly loves.

Saying NO to Sabbath?