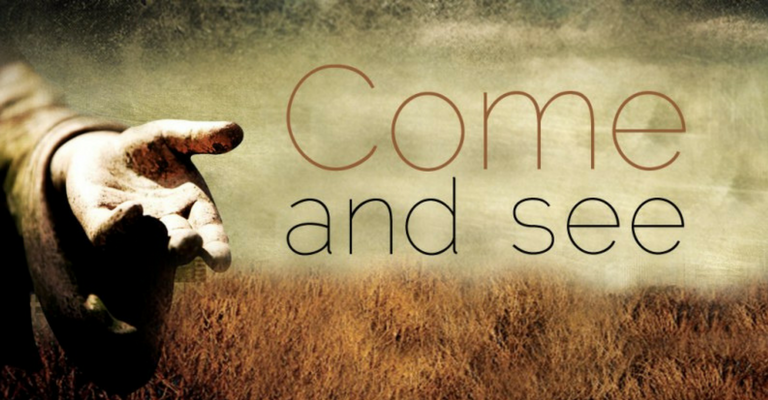 “Nazareth! Can anything good come from there?” Nathanael asked.

So, it was not surprising that Nathanael’s response was indifference when he blatted with the words of “Can anything good come from there?” But what was interesting was Philip’s response. Instead of trying to explain further which he apparently could not since he was also a new follower of Jesus or enter into an argument with Nathanael. He invited Nathanael to “Come and see for himself”.

Similarly Jesus Himself invited those who inquired about Him to “COME AND SEE” – John 1:39, “Come,” he replied, “and you will see.” So they went and saw where he was staying, and they spent that day with him. It was about four in the afternoon.

There is yet another such invitation recorded in the Bible where the Samaritan woman told her people to come and see. “Come, see a man who told me everything I ever did. Could this be the Messiah?” (John 4:29).

There are important lessons we can learn. Too often we are quick to pass critical judgement on people who turn down the Gospel we so passionately shared. Especially when they are from a different cultural background, social status and educational level. We want instant result from our effort. We fail to recognise that people are indifferent to the Saviour only because they do not know Him yet. Jesus is to them nothing but a name.

So, how can we like Philip invite Nathanael to “come and see for himself?”

May I suggest the following:

First, we can read and share from the Bible what it says about our Lord Jesus. This is inviting others to come and examine for themselves who Jesus is and what Jesus said about Himself and the Kingdom of God. About repentance and believing in Him for eternal life. Did you notice Philip’s invitation was “Come” and not “Go”? So, it is important we should come alongside them to spend time exploring what the Bible teaches us.

The second thing we could do is to share our personal testimony when the opportunity arises. Our friends want to hear the events or the progression that contributes to shaping our conviction in believing Jesus.

Finally, we can pray together with them and for them to know and believe in Jesus. There is only so much that a man’s effort can accomplish for the Cross but it is the encounter of Jesus and the Spirit that will prove most persuasive.